On 31st July, Neflix announced that Staunton takes on the role played by Claire Foy and Olivia Colman for the fifth series of historican drama CROWN. The first series of this drama was launched in 2016. It tells the story of the political struggles, love and hatred behind the reign of Queen Elizabeth II and the events that changed the history of the second half of the 20th century. The critically acclaimed drama has received 309 nominations and 99 awards. Apart from the attracting story plot and near-real royal family life, another factor that attracks lots of audience's eyeball is the sparkling crown or tiara with exquisite craftsmanship showing in this drama. Actually, every tiara showing in the Crown series is the 1:1 copy of the collection of royal family.

In the first episode of first season, the Queen Elizabeth II is wearing Queen Mary's Fringe Tiara in her wedding. Queen Mary's Fringe Tiara, also known as the George II Fringe Tiara, was created for Queen Mary, and given to Queen Elizabeth in 1936. She, in turn, lent it to Princess Elizabeth to wear on her wedding day. Queen Mary first had the tiara made up from a necklace she was given as a wedding present in 1893. Garrard created the new tiara, which could still be worn as a necklace. The Queen Mother seldom wore the tiara, preferring two others, but again lent it to Princess Anne for her marriage to Captain Mark Phillips. On the Queen Mother's death, the Queen inherited it and began wearing it. 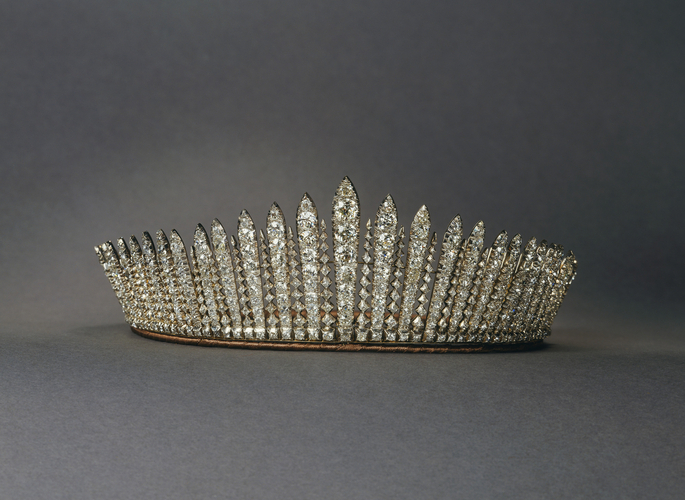 The fringe tiara originated in Russia, and is a common feature of many royal tiara collections. A fringe tiara consists of graduated diamond posts, the tallest in the center and descending in size, separated by narrower posts in a differing shape. The stones are closer together and have a dense, less lacy appearance than most tiaras.

With the fall of the Russian monarchy, many of the jewels owned by the Russian royal families found their way into the collections of monarchs from other countries as suddenly-impoverished royals found it necessary to sell the pieces in their collections smuggled out of the country during the Russian Revolution. Among these pieces is the Grand Duchess Vladimir Tiara.

Grand Duchess Maria Pavlovna (aska Grand Duchess Vladimir Alexandrovich) amassed a sizeable collection of jewels, and set up a court to rival that of Nicholas and Alexandra, where she could show them off. This tiara was among her finest pieces, consisting of 15 intertwined circles, each with a drop pearl within it, created by Bolin, the Russian court jeweler, in the late 1800s.

The tiara was sold by her daughter to Queen Mary in 1921. In 1924, Queen Mary arranged for 15 of the Cambridge emeralds to be mounted so they could be worn with the tiara. The tiara can also be worn without pendants, making the tiara lighter to wear.

Although the Queen generally wears the tiara with the pearls, has occasionally worn the tiara with no stones, commenting that it is "quieter" than with the hanging stones. Like the Girls of Great Britain and Ireland, this tiara is among the Queen's favorites.

Queen Alexandra's Kokosknik tiara is in the Russian fringe style popular in the late 19th century. A kokosknik is an arched headdress word in Russia to anchor a headscarf; its basic shape was adapted into a tiara for Alexandra, Princess of Wales (later Queen Alexandra) for her 25th wedding anniversary in 1888.

The tiara, a gift from the 365 peeresses of the realm, was inspired by jewels owned by Alexandra's sister Dagmar, later Empress Marie Feodorovna of Russia (the mother of Tzar Nicholas of Russia.) 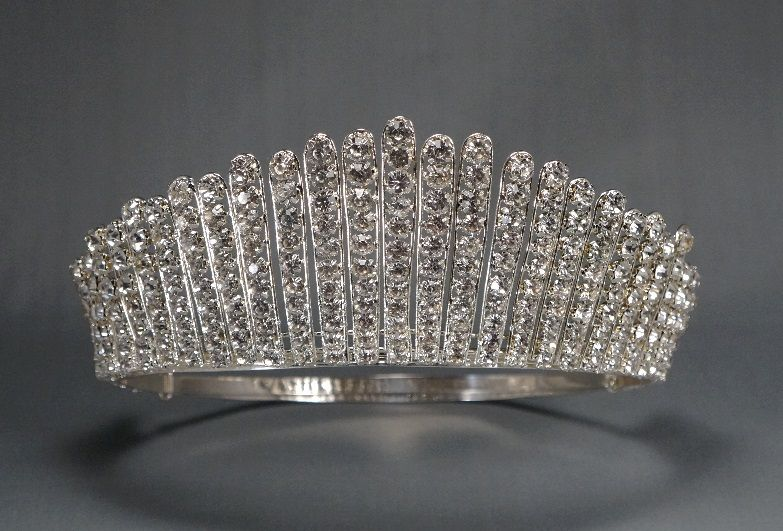 The tiara is made up of 488 round diamonds set in platinum bars, and was created by Garrard, the Crown Jeweller. Queen Alexandra wore it often. Upon her death in 1925, it passed to Queen Mary, who also wore it. Upon the death of her husband, Edward VII, she retained the tiara as a personal possession rather than passing it to Queen Elizabeth (later the Queen Mother). When she died in 1953, it was inherited by Queen Elizabeth II, who wears it frequently. Like Queen Mary's Fringe tiara, the Kokoshnik can also be adapted to be worn as a necklace. 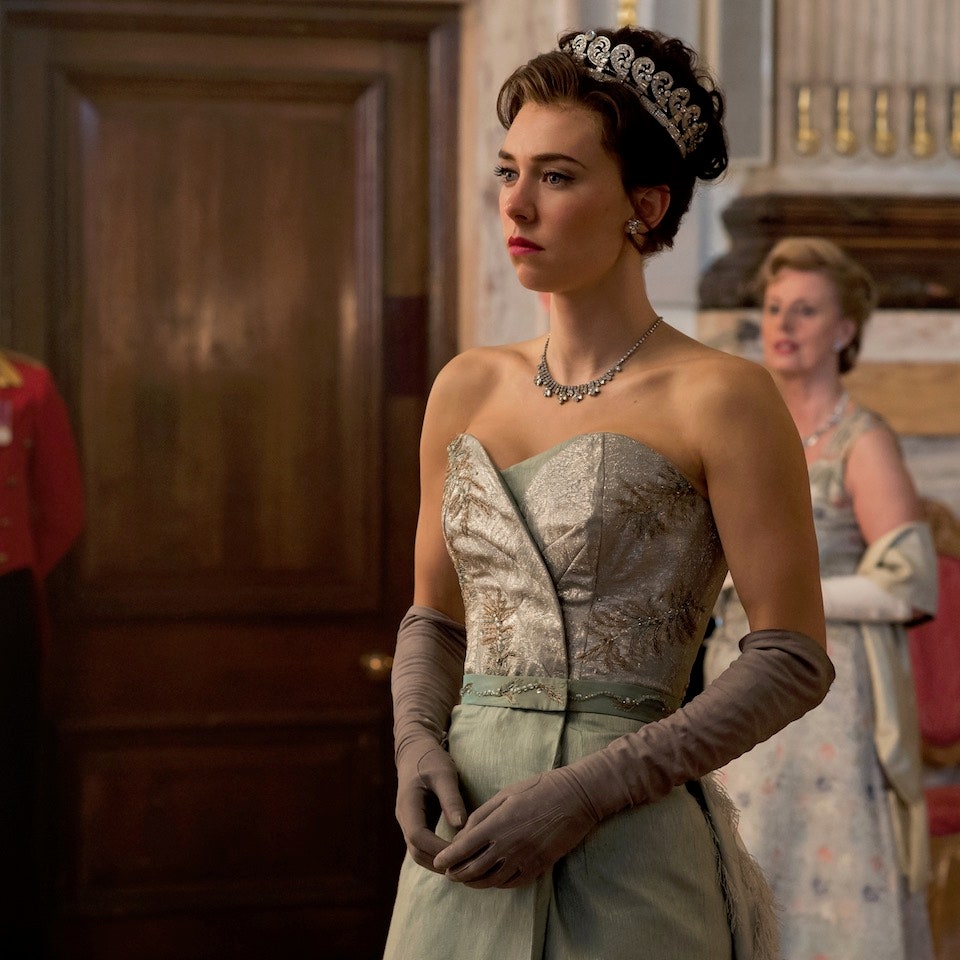 Previously known as the Scroll Tiara, the Cartier Halo Tiara was owned by Queen Elizabeth the Queen Mother, although she seldom wore it. The tiara was made in 1936, just weeks before the Duke and Duchess of York became king and queen.

The Duchess was seen wearing it only once; preferring the grander tiaras available to her when she became Queen. The tiara was given to Princess Elizabeth as an 18th birthday gift. Although she never wore it herself, she lent it to Princess Margaret, who wore it frequently as a young woman, then later, to Princess Anne. 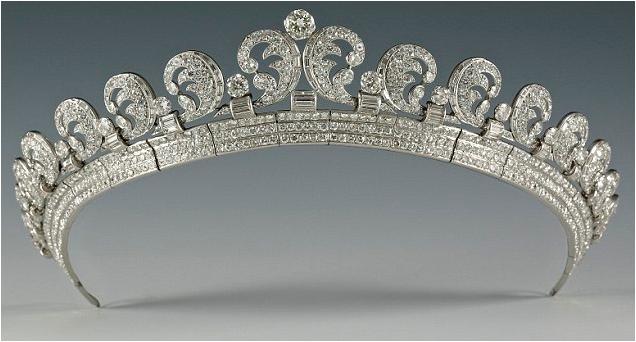 Often thought of as a young woman's tiara, it soon was retired to the vault until it reappeared in 2011, anchoring Katherine Middleton's bridal veil at her wedding to Prince William. Accompanying the tiara were a pair of drop earrings made for the Duchess by Robinson Pelham, which echo the finials on the tiara, a wedding gift from her father and mother. 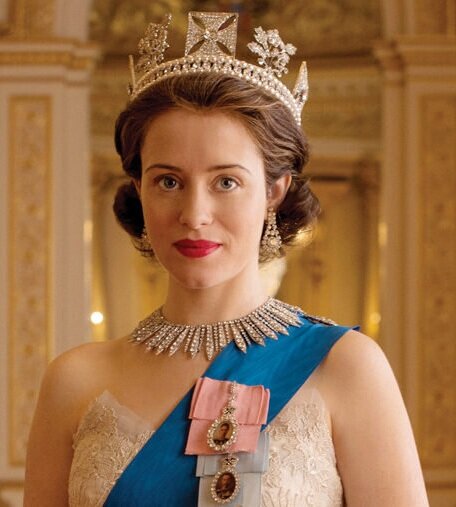 The George IV State Diadem, also known as the Diamond Diadem, is worn by the Queen to the State Opening of Parliament; the Queen also wore it in the procession to her coronation. 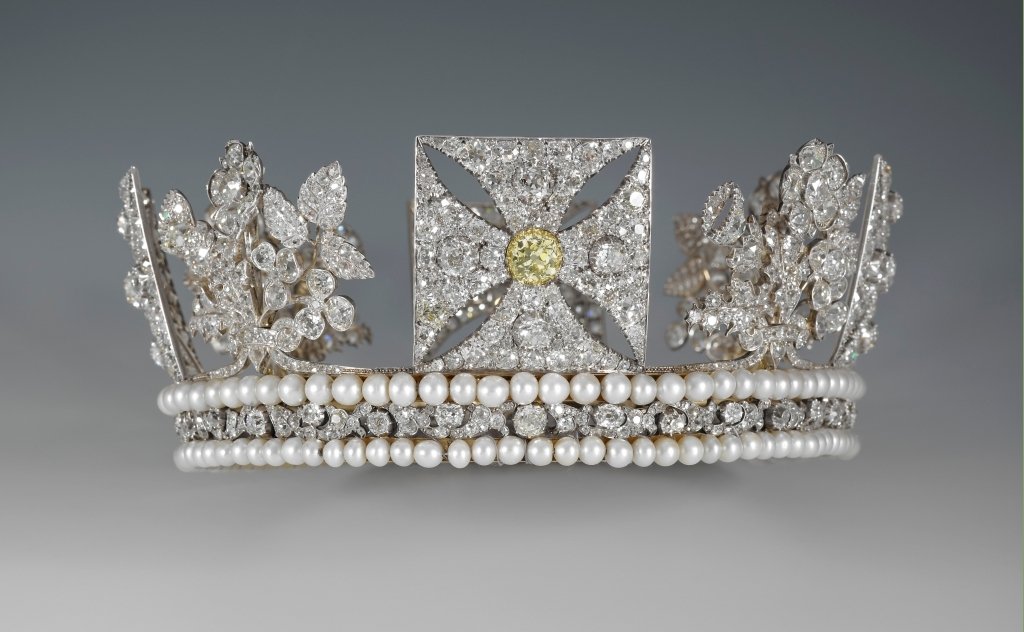 It has appeared in portraits and photographs of the Queen, and she shown wearing it on the money of many of the Commonwealth countries. The diadem was commissioned by King George IV in 1820, and created by the Crown jewelers Rundle and Bridge. It includes 1333 diamonds weighing in excess of 320 carats, including a four carat yellow diamond. Between the crosses are roses, thistles and shamrocks, the flowers of England, Ireland and Scotland. 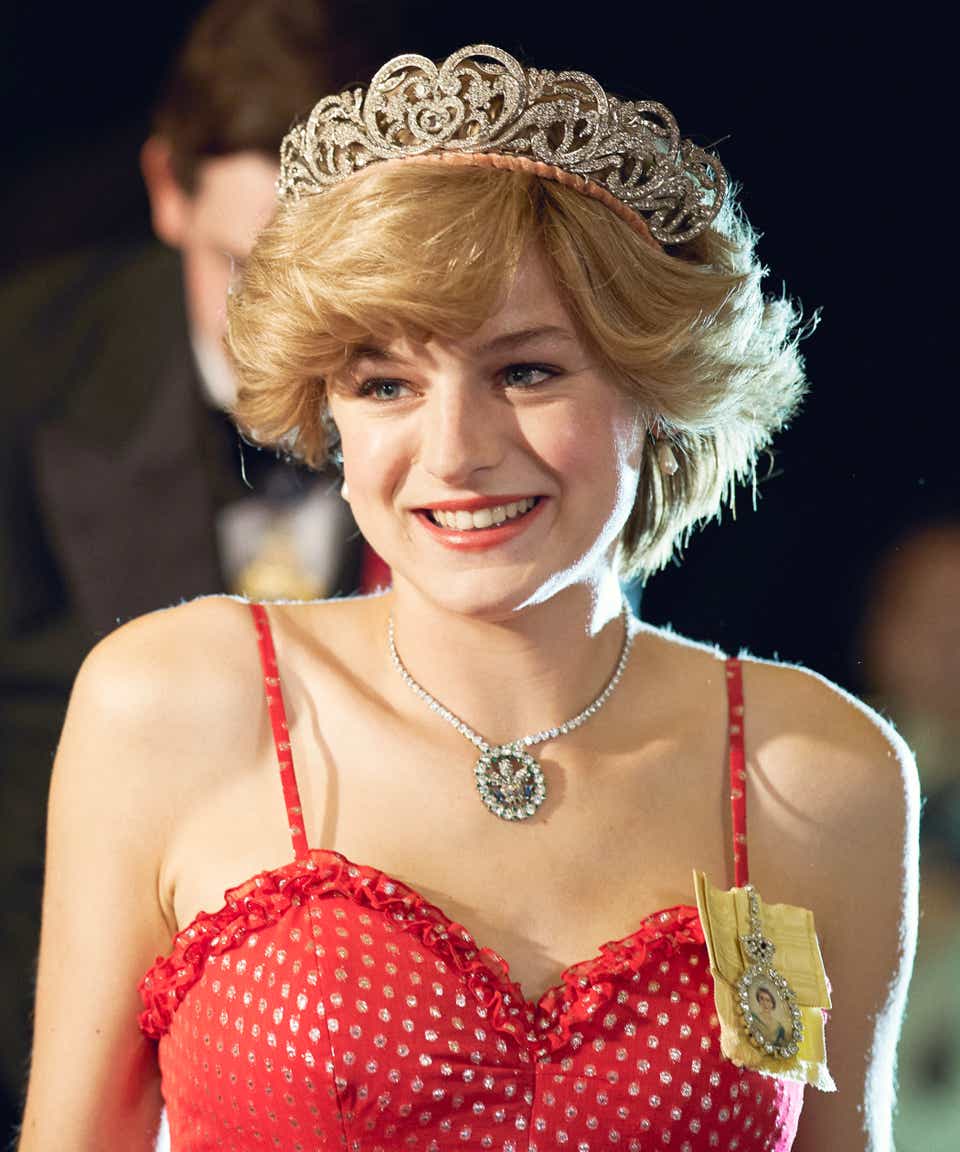 Spencer tiara, as the name suggests , belongs to Diana's family , which is Diana's favorite tiara. Someone guess it is because this spencer tiara is much more lightweight than the Cambridge Lover's Knot tiara, another one Diana usually wear in front of the public.  It made its official, historic, and global debut on July 29, 1981, nestled on top of Princess Diana’s 153-yard tulle veil, designed by David and Elizabeth Emanuel. 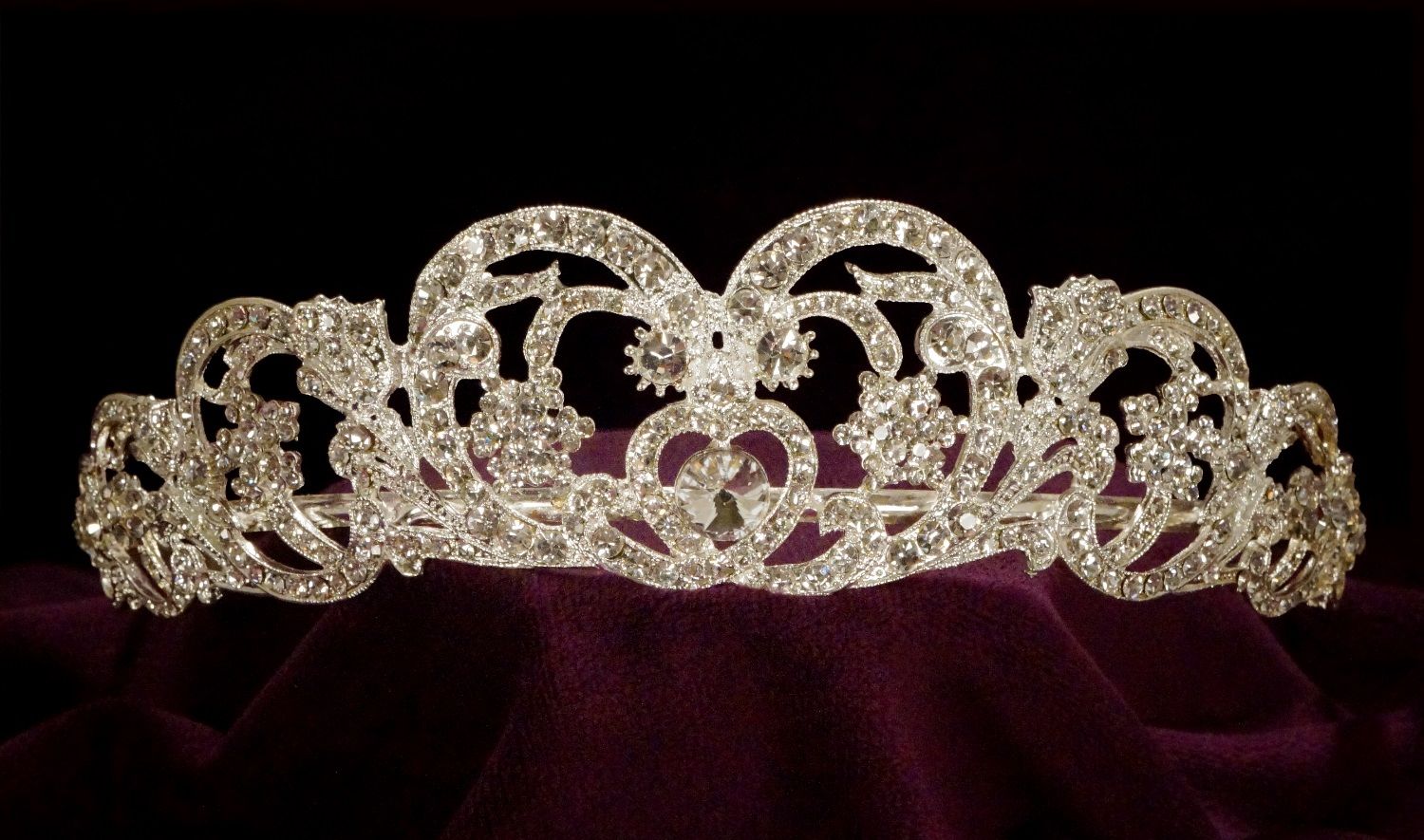 It was assembled finally by Garrard in the 1930s from several gifts that had been bestowed on the Spencers, primarily the central floral piece which was given as a present to Lady Cynthia Hamilton on the occasion of her wedding to the future 7th Earl Spencer, Lady Diana's grandfather.

The Greville Tiara, Also known as the Bucheron Honeycomb Tiara, this tiara was a favorite of Queen Elizabeth, the Queen Mother. It was designed by Boucheron in 1921 for well-known society hostess Margaret (Mrs. Ronald) Grenville, who was a close friend of King George VI and Queen Elizabeth. Having had no children, she left her collection of jewels, sometimes known as the "Greville Hoard" to the Queen in 1942.

The tiara is among the largest in the Queen's collection. 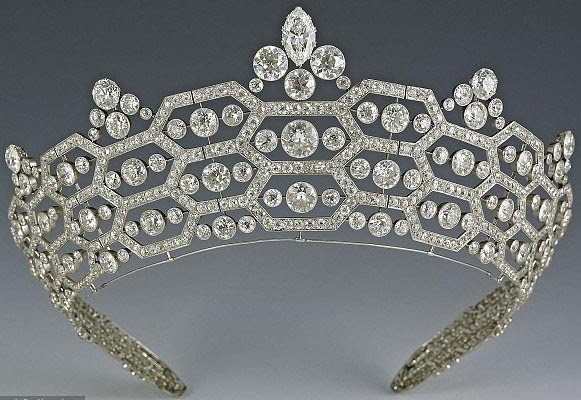 Originally the tiara had a closed top, but after the war, the Queen had Cartier remodel the tiara to open up and rearrange the top level to add small diamond finials, including a central marquise-cut diamond. The tiara soon became one of the Queen Mother's two favorites. On her death in 2002 it passed to her daughter, Queen Elizabeth II, who never wore it. In 2005, she lent it to, Camilla, Duchess of Cornwall, who wears it regularly, as it is well suited to her stature and abundant hair. 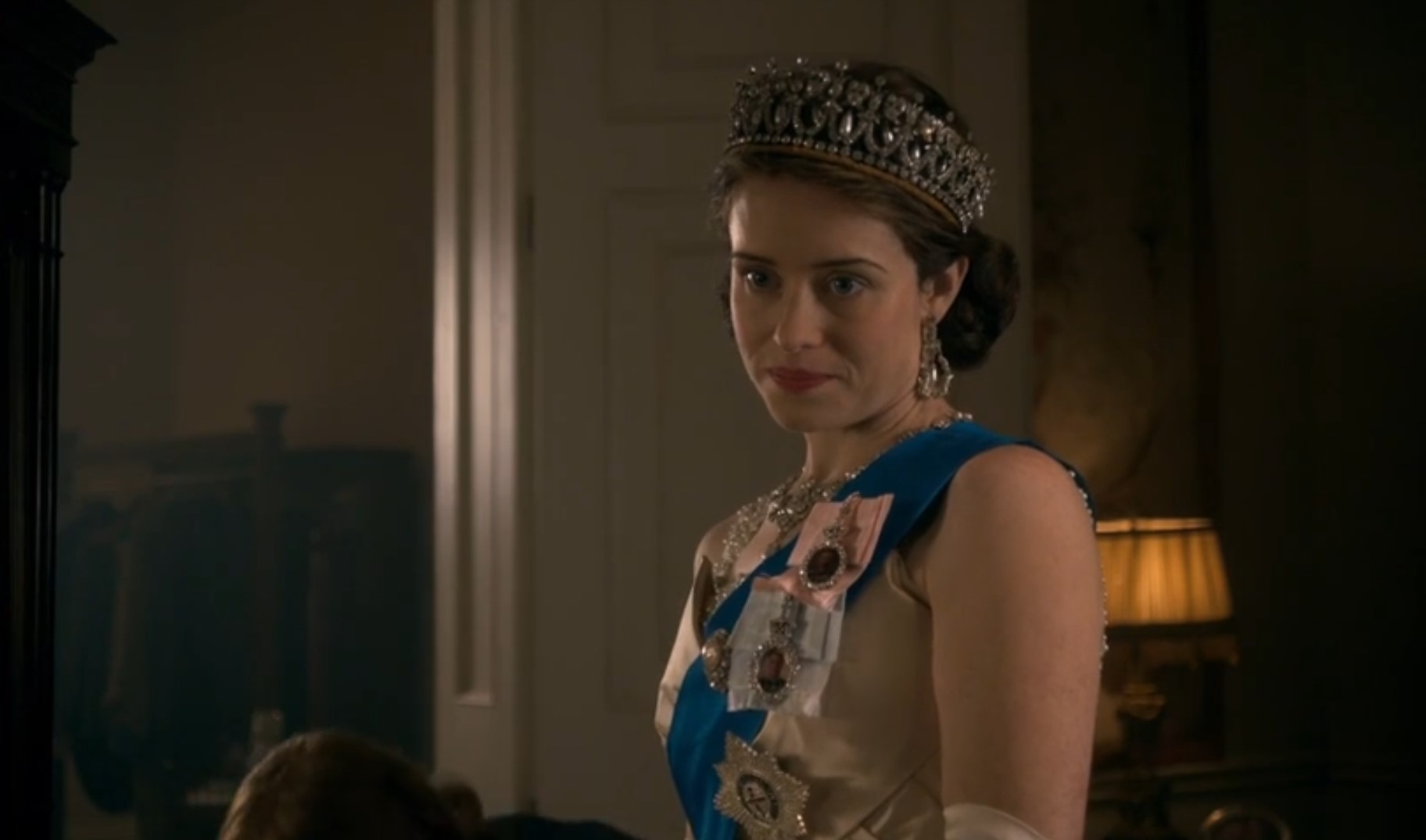 The Cambridge Lover's Knot tiara was commissioned from Garrard by Queen Mary in 1913. The tiara consists of stones already owned by Queen Mary, largely taken from a tiara she was given as a wedding gift and later dismantled. The tiara consists of 19 inverted arches, bridged by a diamond lover's knot, from which a pearl drop hangs, capped by a diamond finial. It originally included upright pearl finials, similar to the Girls of Great Britain and Ireland tiara, but these were later removed.

Queen Elizabeth inherited the tiara after Queen Mary's death, and wore it early in her reign before putting it in the royal vault for a time. In 1981, she loaned it to Diana, Princess of Wales upon her marriage to Prince Charles. Princess Diana wore the tiara often, although she found it heavy to wear. On her death, it returned to storage, and only recently has been seen again, now worn by Catherine, Duchess of Cambridge on two occasions.

The Girls of Great Britain and Ireland Tiara is believed by many to be the Queen's favorite tiara. The tiara was purchased from the Crown Jewelers Garrard in 1893 as a wedding present for Mary of Teck, later Queen Mary. The original verision had pearl finials at the top, later removed and replaced with diamond collets; the pearls became part of the Lover's Knot tiara. Queen Mary later removed the bandeau at the bottom and wore it as a separate piece. The two remained separate when the tiara was given to Queen Elizabeth; she had it reattached in 1969, giving the tiara extra height.

The Girls of Great Britain and Ireland is one of the most identifiable tiaras the Queen wears; she is pictured wearing it on the current British currency. When not worn by the Queen, it can be viewed at the Queen's Gallery in London. 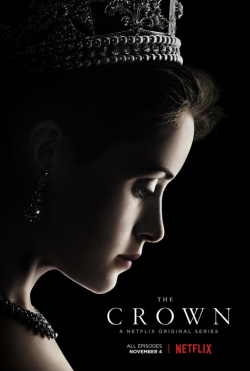 The crown series are not simply showing the history of United Kingdom in the reign of Queen Elizabeth II. Its core storyline is more about how a young,naive and unwordly girl gradually growing into a responsible, strong-hearted, tough and tensile monarch in the political world fulling with man. The crown she wear is not only the symbol of greatest power, but also a pressure and responsibilty, encouring her to grow up, to be stronger. As sharkspear once said- Uneasy lies the head that wears a crown. In the light of this inner spirit, Joycenamenecklace newly released crown nameplated necklace, which is inspired by the classical waterdrop design of on the top of the Queen Elizabeth II's favorite - The Girls of Great Britain and Ireland Tiara. Traditional bazel setting and micro paving are applied on it to ensure that every sparkling AAAAA+ VVS Diamond Simulate tightly standing on the necklace. 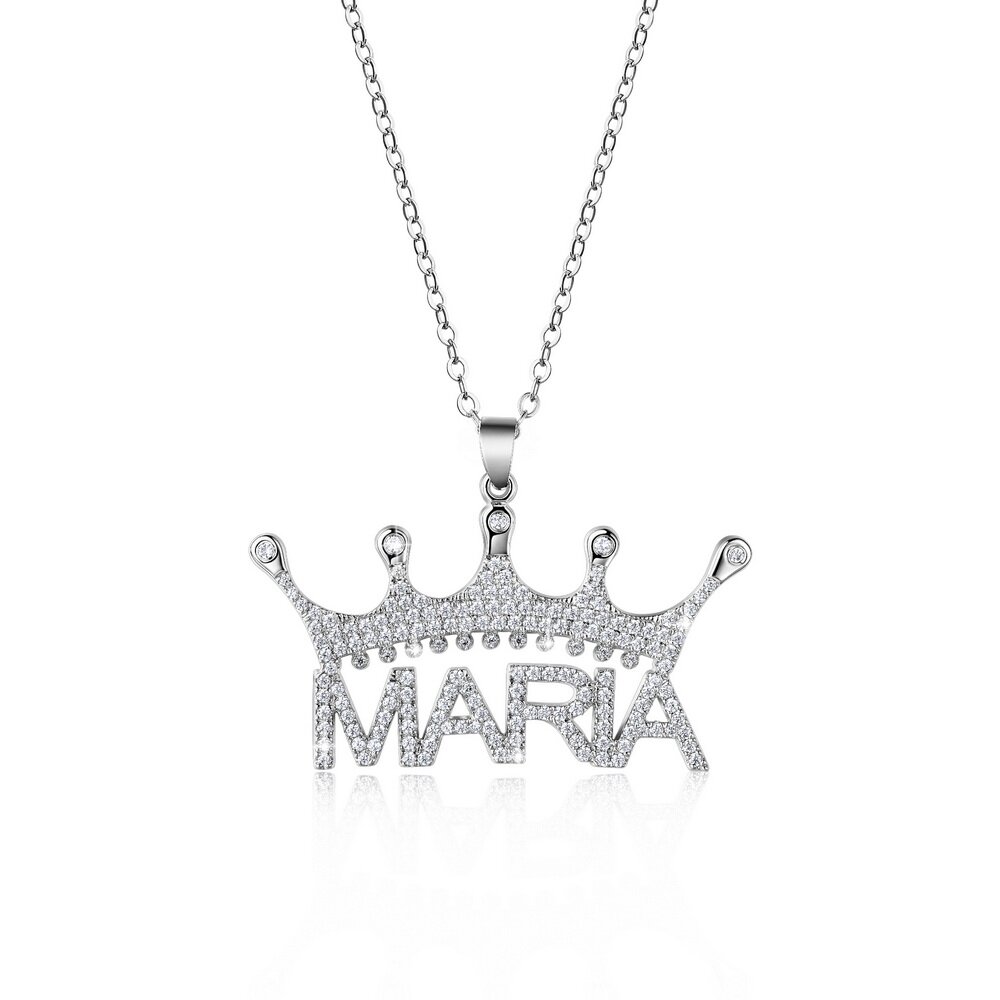