Stones, diamonds or gems can be secured in the pendents or rings in many ways. Different ways of setting can create a huge difference to the whole appearance of the jewelry and its day-to-day practicality. 7 types would be introduced below to tell you how the settting works.

Prong setting refers to the setting method of holding the gem tightly with a metal prong on the precious metal bracket.  The number of prongs include two, three, four, five, six and even eight. Four prongs setting and six prongs setting are the most common way. For example, these two methods are often used in the setting of the standard round diamond, because they can firmly lift the big diamond and allows a large amount of light to enter the main stone from all directions, making it look bigger and more flashing! 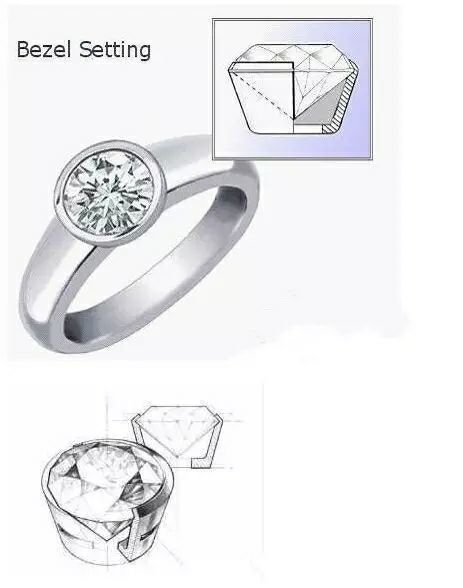 Bezel setting is a technique in which the girth of a gemstone is wrapped by a metal edge.  Bezel setting is the most secure option, because it protects the center gemstone from impact and can keep its edges safe from chipping and breaking. However, comparing to the prong setting which allow a large amount of surface of the gem being exposed, the disadvantage is obvious for bezel setting- it would cover a great amount of gemstone’s surface, reducing its spark and size.

As the name implies, a full bezel is where the metal surrounds the entire circumference of the center stone, covering it from all angles. This setting provides the most amount of protection for the edges of the stone, making it less prone to breakage and chips. 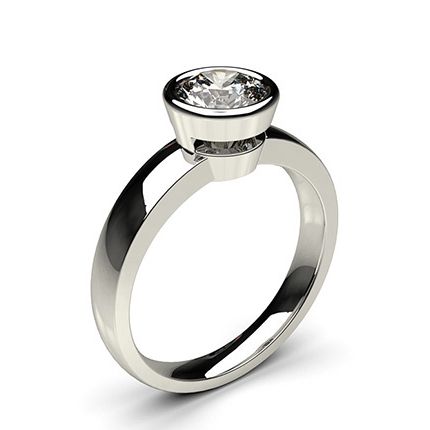 However, full bezel settings hide more of the gemstone, which can make it appear smaller. You won’t see its side view or have light reflection from the sides. As a result, the diamond only sparkles face upwards, reducing its brilliance and size.

A partial bezel setting only encircles parts of the gemstone. The benefit of the partial bezel is that the stone is more visible and can appear larger. Because the sides are uncovered, light is able to reflect of these areas of the stone, resulting in more fire and brilliance as compared to full bezel settings. 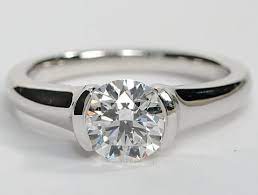 However, with partial bezel settings, the stone is less protected and there is the possibility that the exposed sections can chip or break if struck. 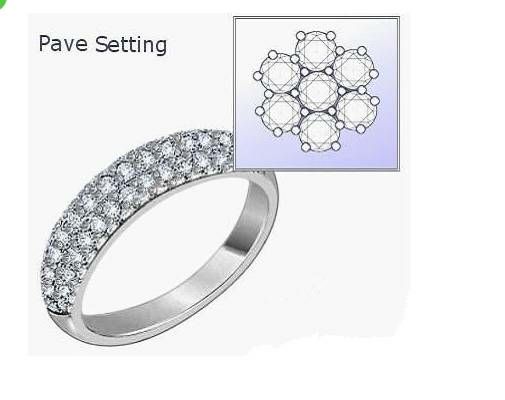 Pavé (pronounced pah-vay), from the French word for “paving,” is a setting in which several small diamonds or gemstones closely set together, resulting in a line or pavement, creating a very shimmering effect. if the paved stones are especially small (smaller than about .01 carats), it is a micro-pavé setting. 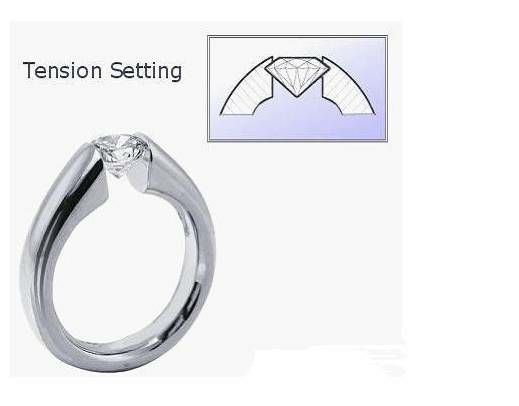 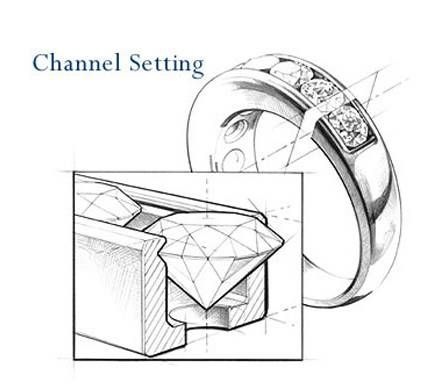 The channel setting is a type of ring setting where an array of smaller stones are set along a track between two straight metal lines. The stones are nestled against one another and not separated by prongs, beads, or bezels. The flush setting, also called gypsy or hammer style setting, is a lesser known and unique setting choice for rings. It features a metal band with diamonds or gemstones set flush against the metal, creating a sleek and stylish look.The diamond’s secure position in the ring protects it from chipping or falling out. Oscar Massin, a French jeweller born in the early 19th Century, invented the illusion setting. The illusion setting displays a small diamond in a precious metal sourrounding that has been patterned so that it mimics the facets of the diamond. Similar to pavé setting, grain setting uses small stones that are held together by tiny prongs. With no visible gap between the stones, this setting gives the appearance of a diamond encrusted ring.

An invisible setting is a mounting that holds the stones in a ring so that the setting itself is not prominent.Whereas in a regular setting you can see prongs or bezels, the gemstones in an invisible setting look as if they were held by nothing.There is a metal framework on which the diamonds are mounted. The stones themselves have small channels cut in their bases, and the framework’s rails fit into these grooves. The most often heard complaint about this setting is indeed that the stones fall out easily.